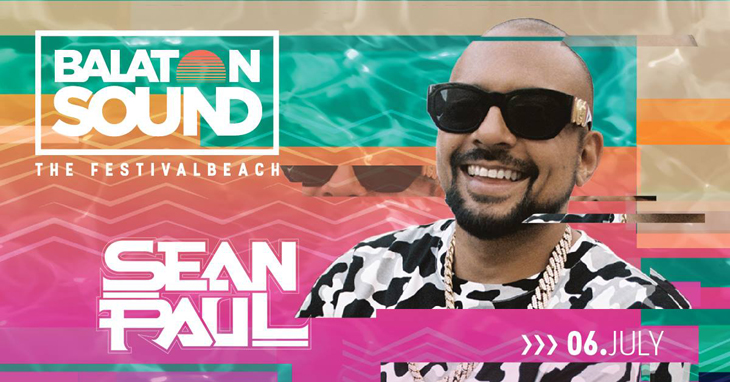 With Balaton Sound gearing up for this summer’s huge 2019 festival at Lake Balaton, the latest array of names set to join the all-star list in Hungary has been announced. Jamaican superstar Sean Paul, who recently collaborated with Stefflon Don, Wiley and Idris Elba on their new single „Boasty“ will headline the event on Saturday 6th July. He’ll be joining already announced talent Marshmello, Tiesto, The Chainsmokers, Armin van Buuren, J Balvin and Rudimental.

With multifaceted talent Youngr performing on Saturday, the festival’s penultimate day will also include appearances from double-platinum artist MadeInTYO, fresh from the release of his 2018 album ‚Sincerely, Tokyo‘ joining Def Jam maestro Desiigner (one of a select club of artists to have surpassed one billion Spotify streams).

Rounding off the Phase Three cast, Sunday sees Balaton attendees treated to the slick sounds of East-Coast American producer Gryffin, and global superstar KSHMR – the DJ and producer has collaborated with everyone from Waka Flocka Flame and Kylie to this year’s festival headliner Tiësto.

With even more names to be announced in the upcoming weeks, Balaton Sound 2019 is shaping up as the most in-demand edition of the Hungarian festival so far. The 5-Day Balaton Pass gives the full crazy beach party experience at Lake Balaton, whilst fans can opt for a 3 or 4-day ticket pass giving them a chance to enjoy a split of the festival. Day tickets start from € 68, 3-day passes from € 179, 4-day passes from € 199 and 5-day passes € 225.

RETURN OF SAFETY FIRST INITIATIVE FOR THE 2019 FESTIVAL

Hungarian festival Balaton Sound is pleased to announce the return of the ‘Safety First’ Initiative, which was originally launched last year to help young people become more conscious and secure.

With the help of an expert team and with the involvement of the festival attendants, Safety First experts aim to educate young people on problems that might arise during the festival, such as drug use, alcohol abuse, and mental problems. With dedicated volunteers on site to make sure that Balaton Sound is a safe place for all festival goers, the 2019 festival – set to take place between 3rd and 7th July – will aim to involve the international audience in the initiative this year.

With Balaton Sound aiming to encourage future volunteers, and to make the whole program widely known amongst a global audience, the 2019 festival is sure to prove the most unmissable edition of Balaton Sound so far, with the likes of Armin van Buuren, Tiesto, Marshmello, DJ Snake, and The Chainsmokers joining an already stellar line-up packed with the finest electronic talent around taking place at the stunning Lake Balaton.