Balaton Sound is an emphasized touristic event in Hungary, it is not just a music festival but an important “touristic magnet” which attracts more than 150 thousands of visitors, much of them from other European countries, this way it has an important role in the international popularization of Lake Balaton. 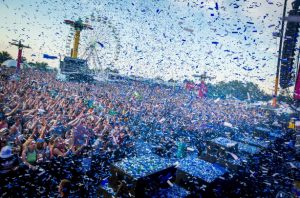 Balaton Sound, the 5-day beach festival, hosted the most wanted world-class DJs as well as the world’s most demanded party series Elrow, which made an impressive debut on the festival, becoming a popular new party venue. On Saturday – with the anticipated shows of Robin Schulz and Kygo, among others – the party was sold out and the weather was gracious with Balaton Sound through all 5 days of the festival. The street theatre performances brought down the house, the giant jellyfishes, drummers and the real Rio atmosphere showed a new image of the exciting and spectacular festival. The piers built on the lake were full and the daily running Party Boat was sold out, many of the visitors have tried Mingo Polo and water sports also were popular. One of the new elements of this – supported by Hungarian Tourist Agency – were the 360 VR tour, where visitors could participate in virtual country tours in the surrounding area of the festival and visit Badacsony, Tihany or the center of Veszprém.