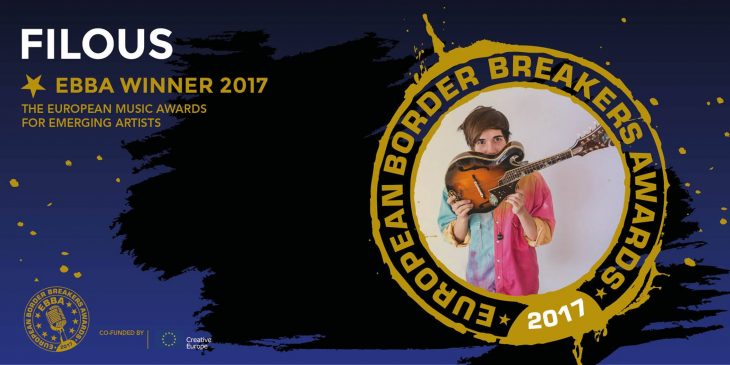 The winners of the 2017 European Border Breakers Awards (the „EBBA“), the European music awards for emerging artists, were honoured yesterday evening at the Eurosonic Noorderslag festival in the Dutch city of Groningen.

Yesterday in Vienna/Austria, Filous was announced as the sixth winner of the 2017 European Border Breakers Awards (EBBA), the European music awards for emerging artists. Filous was surprised at Ö3 Hitradio by Benny Hörtnagl.

A self-taught multi-instrumentalist —counting mandolin, guitar, piano, accordion, flute, bass, and drums among a few of his many skills — Austrian producer Filous began remixing tracks in 2014, with notable remixes for artists such as José González and Kodaline. The following year he released his first original tune ‚How Hard I Try‘ featuring James Hersey on vocals. Just as Filous graduated from high school, that track went on to notch over ten million streams and was included on his debut EP, Dawn. The EP harvested positive reviews, often focusing on the use of acoustic instruments imbuing the EP with a ‘richness and warmth usually absent from electronica’.

Earlier, Alan Walker (no), Jaakko Eino Kalevi (fi), Namika (de), Walking On Cars (ie) and Hinds (es) were also announced as winners of an EBBA. A total of ten EBBA winners will be announced in the upcoming weeks. The Awards Ceremony will take place on 11 January 2017 in Groningen, as part of the Eurosonic Noorderslag festival.

Dua Lipa came out as the big winner of the evening, taking away the „Public Choice Award“ by an overwhelming amount of online voters. 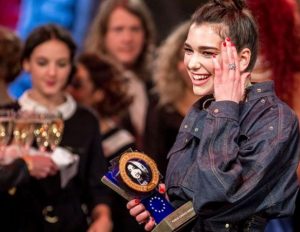 Dua Lipa is a cool singer-songwriter from London, who writes love songs with a grand sound and a twist: strings, melancholic lyrics, electronic beats and dark, sensuous vocals. Hits include Be The One, Last Dance and Hotter Than Hell, proving that Dua Lipa is a mature artist in her own right, with a bright future ahead of her. Over the last year, she performed at a multitude of European festivals, including Lowlands, Frequency, Pukkelpop and Way Out West and charted in countries such as Denmark, The Netherlands, Germany and Austria.

The EBBA are funded under the European Union’s (EU) Creative Europe programme. With the EBBA, the European Union wishes to highlight the success of 10 emerging European artists in selling albums and touring outside their home territory.

The EBBA
The EBBA celebrate new and border-breaking artists who are creating today and tomorrow’s music. From Adele (gb) to Christine & the Queens (fr), the EBBA winners represent some of the standout European sounds of recent years. Other previous winners include Stromae, Gabriel Rios, Hozier, Of Monsters and Men, Mumford & Sons, Aurora, Disclosure, John Newman, C2C, Tokio Hotel, The Script, Years and Years, Robin Schulz, Carnival Youth, MØ and Selah Sue. Last year, 14 public TV stations televised the 2016 award show, which included performances by Oscar and the Wolf (be), Aurora (no) and Álvaro Soler (es).

From groups of enthusiastic gig-goers out on the weekend, through to an industry dedicated to making the music you love, ‘Music Moves Europe’. The EBBA is just one of the ways that the EU celebrates European popular and contemporary music, bringing the artists, the industry and the fans together to celebrate and enjoy the best of European music.

Every year, 10 European artists receive an EBBA in recognition of their success in countries other than their own. This success is measured by:

The European Border Breakers Charts – launched earlier this year and compiled by Radiomonitor – rank tracks from around Europe based on airplay outside the act’s country of origin.

To be eligible for the 2017 awards, the artists must have achieved border-breaking success with their first international release in Europe between 1 August 2015 and 31 July 2016, and also come from a country participating in the EU’s Creative Europe programme.

The EBBA, now in their 14th year, are an EU Prize, organised by Eurosonic Noorderslag in partnership with the European Commission (Creative Europe) and the European Broadcasting Union, with support from Buma Cultuur, the Dutch Ministry of Education, Culture and Science, the Province of Groningen, the City of Groningen and Music Week.

We thank SHURE for their technical support. The SHURE model 5575LE is the protected property of Shure incorporated and its subsidiaries