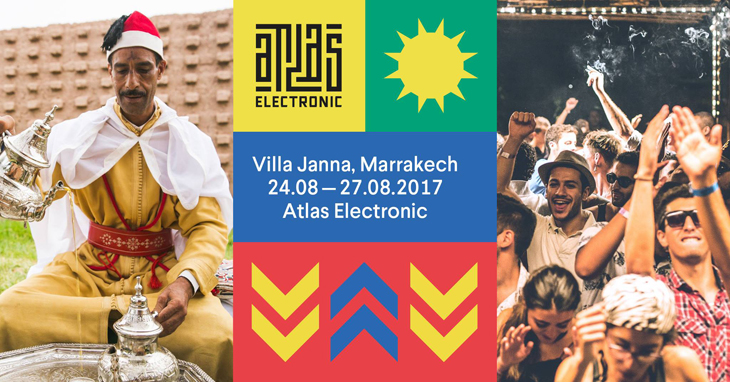 Floating Points, Detroit Swindle, Tama Sumo, Bicep, local Gnawa musicians, Moroccan DJs and more added to the complete Atlas Electronic 2017 lineup. Plus news on how to get the most out of your trip to Marrakech this summer by signing up to the full Atlas Experience!

The second edition of Atlas Electronic returns to Marrakech on August 24—27 with an expanded lineup of international DJs, live acts, local musicians and unique collaborations commissioned exclusively for this year’s event. Headliners include Eglo boss Floating Points, the eclectic Ben UFO and shapeshifting Midland, Running Back’s Gerd Janson, Ukrainian export Vakula, and Panorama Bar resident Tama Sumo, all fine selectors known for integrating an extraordinary range of music into their sets. Then there’s UK duo Bicep and Holland’s own Detroit Swindle, two formidable DJ acts that will bring the party to Villa Janna, alongside many more.

Expecting the finest in disco, house, techno and other dance music styles from the West is a given. But we’re in Africa, which is why at Atlas Electronic you’ll be exposed to a rich blend of native sounds from the traditional to the contemporary. There will be plenty of euphoric Gnawa music around from groups like Maalem Houssam Gania (who played last year with James Holden), to vintage Arabic funk, Ghanaian hip-house and other joyful rhythms from the continent thanks to Ata Kak and Awesome Tapes From Africa chief Brian Shimkovitz. Plus up to date selections from a range of taste-making Moroccan DJs. Oriental-electronic act Jugurtha will be returning, alongside artists like middle-eastern fusion duo Khidja, multi-instrumentalist Cengiz Arslanpay and twice upon a time’s Lounes from Strange Sounds From Beyond, who will all contribute to the cross-cultural experience that is central to Atlas Electronic.

Thursday’s opening concert in the breathtaking amphitheater will be an unmissable event featuring a series of collaborations with Moroccan musicians. Hieroglyphic Being will play with local artist Youssef Chegra, whilst Dutch Pan-African DJ Philou Louzolo is teaming up with wedding troupe Groupe Bana—who stole the show last year. Ancestral Soul King Boddhi Satva from the Central African Republic and Maalem Hammam will present their 2015 studio collaboration for the very first time. Fatima Yamaha will also perform one of his revered live shows. In addition to the main program, there will be plenty of opportunities to catch improvised sets and further artistic exchanges throughout the weekend up on the Red Light Radio rooftop, the ideal spot to survey the stunning scenery and spectacular desert sunsets.

Atlas Electronic is so much more than a festival, it’s a unique holiday too. You can now book packages which include accommodation and a huge variety of travel excursions. As part of the Atlas Experience, we’re offering on-site luxury camping, breakfast and yoga sessions. You can also make cultural day trips to Marrakech and neighbouring Essaouira. The more intrepid visitor should check out the Atlas Mountain range, the Ourika Valley and grand Ouzoud Waterfalls, or the red city of Ouarzazate—the gateway to the Sahara Desert. Jump on a quad bike, delight in local cuisine or survey the land from above in a hot air balloon! There’s plenty to see, do, explore. The Atlas Electronic adventure begins now. 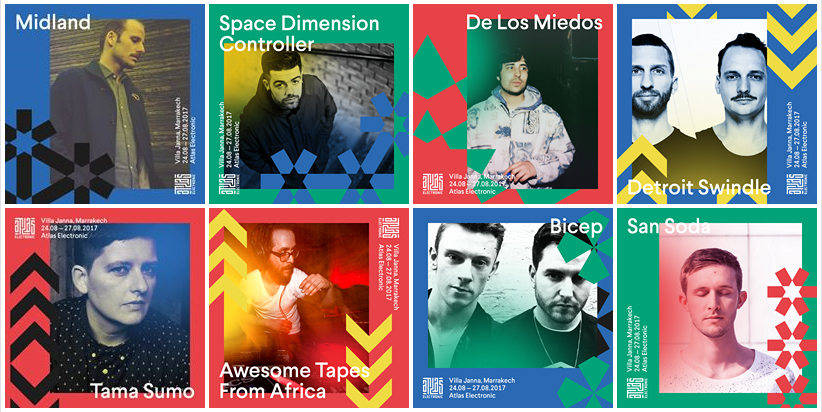 Atlas Electronic is back with a fully complete Atlas Experience!

Atlas Electronic will return to Marrakech this summer and you can book your all-around Atlas Experience now! With the recent addition of group tickets, accommodations, and loads of traveling adventures it seems like they just raised the bar for festivals worldwide. The elaborate programming suggests the main goal this year, is to more than ever, submerge visitors in musical, artistic, and cultural cross-overs between the West and Marrakech, giving you the opportunity to explore the best of both worlds!

What started as an idea for a small event last year exploded to what is now Atlas Electronic Music, Arts & Culture Festival, a four-day celebration of cross-cultural art forms. Praised by visitors and having left an imprint on the artists, expectations for a next edition have been very high. The first wave of artists has been released and this has definitely set the tone. With live acts from Fatima Yamaha, Ata Kak, and Prace x Sattar, homegrown artists like M.A.O.U., Dex Le Maffo, and of course public’s favorite Gnawa band Groupe Bana, and a varied musical diet from all over the world served by names such as Hieroglyphic Being, Gerd Janson, Ben UFO, Jameszoo, Vakula and many more to come, the line-up is a delicate representation of international diversity and cross-over in cultures and sound. This is only the first wave and it sounds like there’s a whole lot more where that came from.

Music: check
But what else will they bring to the table? Last year, accommodation was in nearby hotels nestled between the palm trees in the palmeraie. Although of course, this is still an option, this year Atlas decided to offer its visitors a little more than that. Bathe in the full Atlas Experience for four days and nights at their on-site Desert Camping. Stay in four-person traditional luxury tents with special side programming and breakfast included. Fall asleep to the waving words of their storyteller and enjoy a good morning stretch with a yoga session. One of Atlas‘ confirmed partners is ‚Kech Collective which will curate the art programming in the weeks prior to and during the festival. Keeping this in mind, this might just be a boundary-breaking experience not only on a musical but on an artistic level as well. Atlas’ focus lies once more on translocal crossovers.

Accommodation & Arts: check
This year Atlas Electronic Music & Arts added an extra title – Culture – which, after their most recent announcement, seems well deserved. For the 2017 edition, Atlas joined forces with some of the best, local traveling partners to spice up your trip. From day trips to Essaouira, Ouarzazate and Ourika Valley’s, to explorative quad trips. Do you want to relax after four days of dancing, or can you not sit still and are you ready for adventure? Arrive a couple of days prior to the festival and explore the hidden beauties of the Moroccan lands, deserts, mountains, and even the sky! They even added a very special bucket list experience for your journey: a breathtaking balloon flight with its very own story. Check out more excursions and adventures on www.atlas-electronic.com/travel!

Culture & Travel: check
Atlas Electronic Music, Arts & Culture Festival 2017 is every reason to expand your horizon, share in creativity, experience what is out of your comfort zone, and to never want to go back home. So much more than a festival, a holiday to remember!