ARIEL PINK TO CURATE STAGE AT OFF FESTIVAL 2018

ARIEL PINK TO CURATE STAGE AT OFF FESTIVAL 2018

Ariel Pink and …And You Will Know Us by the Trail of Dead invite you along on a journey into the past; Wednesday Campanella, Housewives and Nanook of the North are taking us into the future, and Or:La and Bass Astral × Igo just want you to dance. 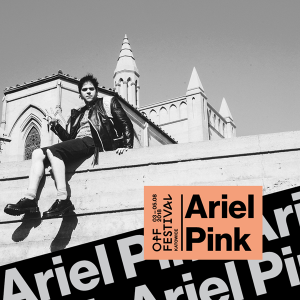 Ariel Pink
We’re proud to announce that Ariel Pink, who played an unforgettable show in 2011, isn’t just coming back to Katowice this year: he’s coming to curate an entire day at the Experimental Stage.

Nostalgia, or, as the English music critic Simon Reynolds likes to call it, retromania, has been a driving force in popular culture for well over a decade. It usually takes the unpleasant form of a commodity that’s been used, sold, and repackaged. But if there’s one artist who knows how to bring ingredients from the 60s and 70s back in his time machine and assemble them into something new and exciting, it’s Ariel Pink. Genres like chillwave were little more than a novelty before Ariel came along. He turned it into an art form comprising sounds and costumes on loan from the past, along with timeless, authentic emotions. His 2017 record Dedicated to Bobby Jameson pays homage to an American vocalist whose career collapsed after a series of unfortunate events. But you get the impression that on this album — and the ones that came before it — the oversensitive Ariel Pink reaches out to all the flawed, lonely people, all the misfits. As one fan wrote in the comments under an Ariel Pink video: “This music makes me feel less lonely.” You won’t find a better review.

“Source Tags and Codes will take you in, rip you to shreds, piece you together, lick your wounds clean, and send you back into the world with a concurrent sense of loss and hope. And you will never, ever be the same,” raved Pitchfork in their review of the third album by …And You Will Know Us by the Trail of Dead (2002), giving them a perfect 10. As the Texas band went into the studio for their first big album on Interscope Records, they realized the expectations that were being put on them, and they met those hopes head-on, pouring into the tracks everything they could have possible learned as a guitar band in the US in the 90s. They carved out a niche of their own, ending up somewhere between the melancholy songs of the Smashing Pumpkins, the no-holds-barred barrage of Sonic Youth, and the sheer imagination of Mercury Rev. And though plenty of time has passed since, along with a series of excellent Trail of Dead albums, it’s just as good that these American rockers have decided to revisit their old triumph.

Nanook of the North
Composer and violinist Stefan Wesołowski, an outstanding representative of the genre known as neo-classical and the author of the critically-acclaimed 2017 album Rite of the End; Piotr “Hatti Vatti” Kaliński, guitar player for the punk-rock outfit Gówno (“Shit”) and now a respected and versatile producer, known for his collaborations with artists like Noon and Misia Furtak — you’d think the two have nothing in common, but looks can be deceiving. The two shipped out to Iceland to record a new soundtrack to Robert J. Flaherty’s century-old documentary film Nanook of the North, and ended up creating a cohesive, believable musical world, a place that’s beautiful and cold, at once attractive and disconcerting. Be sure to check your favorite Polish 2018 year-end lists for Nanook of the North, but don’t miss it at the OFF Festival half a year earlier.

Wednesday Campanella
Their real name is Suiyōbi no Campanella, but they realize that fans outside their native Japan might have a hard time remembering it, so they go by Wednesday Campanella internationally. While you might have trouble with the name, you’re sure to remember (and fall in love with) the band’s music from the very first listen. It’s an explosive mixture of J-pop, hip hop, funk, and electronic dance music, peppered with references to the shameless opulence of the 1980s. Following a series of critically-acclaimed records published exclusively in Japan, Wednesday Campanella debuted internationally in 2016 with the mini-album UMA. Their next step in the West was the release of the full-length Superman (2017), which won glowing praise from The Japan Times (the largest newspaper in the Land of the Rising Song): “Could Wednesday Campanella’s ‘Superman’ be the album that saves mainstream J-pop?”. We don’t know if they’ll save J-pop, but they definitely enriched it, just like they’ll enrich the program of our festival.

Housewives
Plenty of people are wondering whether there’s anything new and original left to do in guitar music in the second decade of the 21st century. A handful of people are just doing it. This London four-piece belong to the latter, using intense, monotonous rhythms to form soundscapes that combine post punk with noise and industrial while eluding any and all of these labels. This Heat and Einstürzende Neubauten: meet your bold and worthy successors.

Or:La
A DJ and producer who deftly navigates the “post” landscape, piecing together the tattered shreds of dubstep, garage and house to build intriguing stories of her own, starting with her debut UK Lonely (2016). Hailing from a small town in Northern Ireland, Or:La took her first steps as a professional DJ in Liverpool clubs, but has moved on to the international circuit ever since DJ Mag hailed her as the “Breakthrough DJ of the year.”

Bass Astral x Igo
Bass player Kuba Tracz and singer Igor Walaszek met in the rock band Clock Machine, and eventually decided they should play dance music together. What they lacked in experience they made up for with talent and energy. Their 2016 debut Discobolus was proof enough that the duo were a noteworthy phenomenon, while their late-2017 EP only solidified their status. These guys have catchy tunes, vivid production, and the kind of energy you just can’t fake. And the records aren’t even the whole story: the Kraków-based pair are famous for their live shoes, and you’ll find out why this August in Katowice.

Tickets
Three-day passes are now available at the OFF Shop for 290 PLN. This price lasts until April 15 or until the second batch of tickets is sold out! Campground tickets are also available for 70 PLN.