AND THE WINNERS OF THE EUROPEAN FESTIVAL AWARDS 2017 ARE… 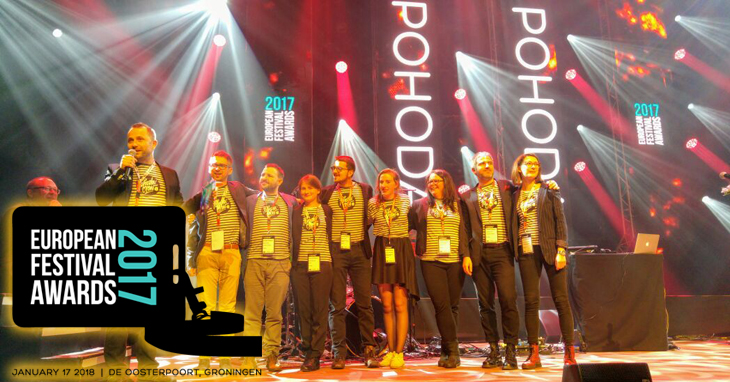 AND THE WINNERS OF THE EUROPEAN FESTIVAL AWARDS 2017 ARE…

Line-Up of the Year
In association with Faceculture
Sziget Festival

Promoter of the Year
Goodlive

We like the grounds where Pohoda takes place. That is why it is natural for us to treat the area with care and respect. The same is true for the community of people who meet at the festival: we behave similarly also outside the festival, so green solutions are a natural part of Pohoda. We are pleased that also the EFA jury has noticed this—thank you for the Green Operations Award.

In addition to improving the quality of services, we strive to continually reduce any impact on the environment. Pohoda is the only festival in Central Europe where biodegradable kitchen and restaurant waste is sorted and even composted directly on site. Also all the used cutlery and food containers went directly into the composter. 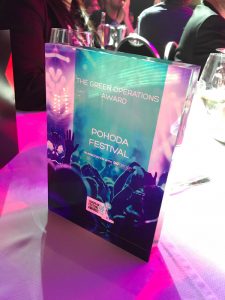 The Živica “powered by ZSE” tent featured discussions and practical workshops on ecology related topics. The tent was also totally energy-independent thanks to its own solar power plant. The power plant can produce up to 120 kWh of electricity per day. Electricity produced in this way may cover, for example, the total lighting consumption of 120 households, saving 30 kg of CO2. Solar LED lamps contribute to a better orientation on the grounds: they illuminate the runways and all the important areas. The energy produced in this way would be enough to charge 3,000 mobile phones and it saves more than 49 kg of CO2 emissions.

Transport, too, is also an important part of the emission reduction. Also in 2017, in cooperation with our ecological partner, Železničná spoločnosť Slovensko, we dispatched a special festival speed train from Košice and from Bratislava. In addition to that, we arranged Pohoda suburban transport (bus connections of the festival grounds with the surrounding cities) and encouraged visitors to share their cars to travel to the festival through the #spolunapohodu project.

Including last year, we have been included in the EFA TOP 10 shortlist 11 times. For two consecutive years, the Slovak festival has been nominated for the Best Promoter, the Best Medium-Sized Festival as well as the Best Line-Up event. Besides the Green Operations Award, this year Pohoda was shortlisted also for the Health & Safety Innovation Award, the Brand Activation Award as well as the Take a Stand Award (award for the approach to important social issues). Complementary to the votes of the expert jury, the Best Medium Festival and Best Line-Up categories were also decided by a public poll. Last year, 800,000 people from across Europe participated in it. Because of this all, we thank very much especially to you, our fans, for the great evening yesterday. For us, you have been the Best Festival Audience for already 20 years.

EXIT won the Grand Prix in fierce competition comprising of over 350 festivals in 35 countries, that included all the major players in Europe. EXIT has been shortlisted in record-breaking three categories including the main ‚Best Major Festival‘ award, ‚Promoter of the Year‘ and the ‚Take a Stand‘ award for social activism. All the other festivals organized by EXIT team such as Sea Dance in Montenegro, Sea Star in Croatia and Revolution in Romania were also shortlisted in their respected categories, the best mid-sized, the best new and the best small festival. The artist who won the hearts of the audience at EXIT in 2017, Rag’n’Bone Man, was voted Newcomer of the Year.

EXIT Festival founder, Dušan Kovačević, was overwhelmed saying: “It is a truly remarkable success to win the most important festival award in the world again after only four years, let alone in the most important category, among the greatest European and world festivals with budgets 10 times greater than ours. EXIT Summer of Love 2017, comprising four festivals in Serbia, Croatia, Montenegro and Romania, with over 350,000 visitors, will have its place in the festival’s history. An exceptional year is behind us, and for the year in front of us we have even greater plans. We are starting the new winter festival at the Olympic mountain in Bosnia, while EXIT is preparing its best edition in its almost 20-year history. This award will be a driving force to excell in all aspects!”

EXIT’s competition for the award were other European festival giants, such as Tomorrowland, Sziget Festival, Lowlands and Wacken Open Air. This is the second time EXIT has been voted Best Major Festival at European Festival Awards since they were established in 2010, while every year it is shortlisted in this category. EXIT won its first Best Major Festival award at European Festival Awards in 2013, while in 2007 it was voted the Best European (overseas) festival at the British Festival Awards. Winners are chosen by audiences from across Europe, together with an expert committee with standout individuals from the festival industry. The list of winners can be found at the official website.

This year, EXIT Team presents the greatest festival undertaking so far, dubbed EXIT Freedom 2018, comprised of five festivals in five countries. Lead by the officially Best Major Festival in Europe, EXIT, the one to start things off is Festival 84 on Jahorina. What follows are Sea Star and Revolution as an introduction for the greatest gathering at the location of the title defender, Petrovaradin fortress. The end of the summer is reserved for Sea Dance, who won the best festival up to 40,000 visitors three years ago. Apart from EXIT, Sea Dance, Sea Star and Revolution were in the final of their respective categories.