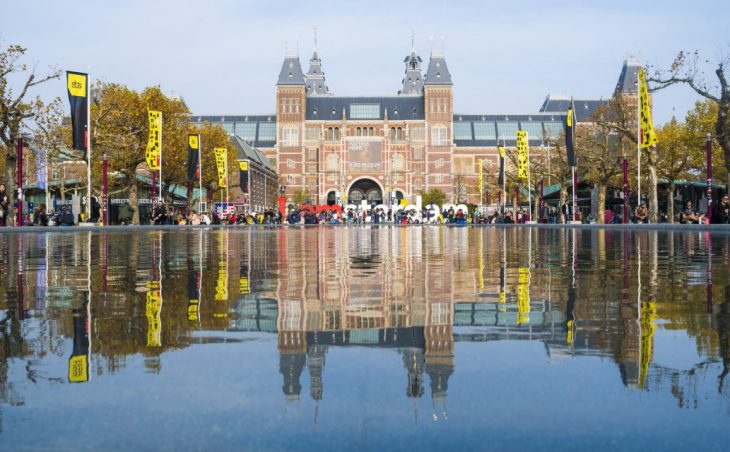 Amsterdam Dance Event is undoubtedly the biggest electronic music conference in the world. Starting out as a relatively unassuming gathering back in 1995, ADE now attracts almost 400,000 visitors every year. During ADE the Dutch capital hosts a myriad events from countless panels discussions at the main conference through to pop-up performances, tech schools and charity events.

South Korea is ADE’s 2018 focus country because of it’s dynamic, technically advanced and productive music markets in the world currently. This means a surplus of festival and conference activities are dedicated to , including Catching The Korean Wave taking place on ADE Thursday at De Balie and presented by BEPC Tangent Creative.

All you want to know about the nightlife in the city of Seoul and the key music industry players of South Korea will be presented to you with several panel sessions on Thursday afternoon at ADE Guesthouse, as Partner Program at De Balie, a 5 minutes walk from DeLaMar Theater.

Other other countries being highlighted as one to watch being Australia, Belgium, Brazil, China, Columbia and Mexico.

Wednesday 17th
Day one kicks of with ADE Pro and ADE Green at the DeLaMar Theater and the return of ADE BeamLab at the Festival Hangout.

Highlighting current and meaningful topics ADE Green includes panels on the effects on mental health from touring, how plastics can be used in a responsible way and music as a driver of positive change in Rave for a Revolution! with panelist from amongst others BASSIANI based on the ongoing project ‘I Dance Alone’ by Serbian/Dutch artist, curator and researcher Bogomir Doringer and the keynote speech by Zoe Margolis, Us Too? – Sexism, Shaming and Standing up for What’s Right in the Age of Social Media being discussed at ADE Pro.

The opening keynote speech at ADE Pro will be Yann Pissenem, owner, founder & CEO of The Night League, the company responsible for Ushuaïa, Hï Ibiza and many other successful brands. The Ibiza club scene is constantly evolving and Yann will discuss how he uses the intersection between art, architecture, commerce, culture and music to create epoch-defining and game-changing clubs and brands.

Paul van Dyk will also return to give a keynote interview at ADE Pro which will be his first public interview after sustaining serious injuries from falling from the stage at the A State of Trance festival. ADE Sound Lab features the The Record Bag of 30 Years of Dutch Dance in which some of the scene’s original movers and the DJs they inspired share the records that set dance floors alight when house music came to the Netherlands, while ADE BeamLab highlights the audiovisual arts with Weltmaschine “World-machine“, Albert van Abbe’s brainchild developed with Andreas Nicolas Fischer.

Over at ADE University you can meet the team behind Audio Obscura. After hosting two superb parties underneath the Rijksmuseum, this year at ADE Audio Obscura host nine events over five days at locations like Central Station, the Scheepsvaartmuseum and more. But who are these guys?

The House of China is a new platform taking place at De Balie that has been set up to connect the Chinese and international electronic music industry and to present the latest developments, opportunities and challenges in the Chinese market.

Thursday 18th
The second day of ADE’s conference offering will include ADE Pro and ADE University for their plus the return of ADE Tech for the second year in a row at DeLaMar. On top of that the ADE Sound Lab program gets started at the ADE Festival Hangout and the South Korea focus program at De Balie

Thursdays Keynote Interview for ADE Pro is with SoundCloud’s CEO Kerry Trainor who will discuss the vision and future of SoundCloud, the integral role of the electronic and dance community on the platform, and share exciting new developments for DJs, live from the ADE stage.

Also at ADE Pro Def Jam VP Bruce Carbone will examin of the ingredients and production style that enabled acts like Crystal Waters, C+C Music Factory, Stevie V, Ultra Naté and Cathy Dennis to create brilliant crossover tunes that rocked the charts in The Power of Pop – What the New Generation of Pop/Dance Acts Can Learn from the 90s.

Netsky will be bringing Lost Frequencies on stage for ADE Soundlab turning it into their own makeshift STUDIO XL. There they will dissect the track they made together ‚Here With You‘. Also at ADE Sound Lab will be In the Studio with De Sluwe Vos and Lucas & Steve, plus the new format The Record Bag of with Jayda G & Kenny Dope.

Alan Walker will join ADE University to highlight the trends, successes, opportunities in China and meet the team behind the Headhunterz.

Over at ADE Tech 5 finalists will battle it out to win in the Companies to Watch session, plus Laidback Luke Goes Back to the Future revisiting his early days as a vinyl-only DJ and recounting how tech changed his performances and how that affected his relationship with the crowd.

Friday 19th
The third conference day will include ADE Pro and ADE University, plus the return of ADE Dance & Brands at the DeLaMar and ADE Beats across the street at the Melkweg. The ADE Festival Hangout is the place to be for gear and MusicTalks at ADE Sound Lab.

ADE Beats kicks off with Major Lazer’s Jillionaire answering questions related to his amazing musical career, international sneaker culture and his unique global approach when it comes to pushing the music forwards. Also ad ADE Beats will be a Keynote Q&A with Khady Thiam Gueye, COO of KonLive, the company founded by her brother, Grammy-nominated, multi-platinum selling artist, producer, entrepreneur and philantropist Akon. In this talk Khady will discuss her unique global perspective on our industry and its untapped worldwide potential and London On Da Track will share some in-depth stories behind his biggest beats and his influence on hip-hop and electronic music in general in this unique 1-on-1 Q&A.

Shanti Das will discuss her vision and guidance as a successful woman in the urban music industry on creating a more inclusive and healthy music industry, with special emphasis on her campaign Silence the Shame that aims to tackle stigmas surrounding mental health and offer more healthy alternatives.

GRAMMY Award winning artist David Guetta will make a welcome return to ADE Pro to talk about this life in music. In this intimate conversation, Guetta will be looking back to his earliest days and formative influences as well as revealing what and who inspired him on 7, his latest recording.

Bonobo will make his his speakers debut at ADE MusicTalks 2018 discussing his musical journey so far and Xosar will host a workshop on sound healing, opening portals of awareness into the effects of sound on the human brain + body.

ADE University host a panel on The Power of Playlists and Tiga and Kölsch will discuss the pros and cons of starting a label, what they’ve both learned about the joy and pain of being involved with labels over their careers and what labels have to deal with in today’s music industry.

ADE Dance & Brands will present a keynote talk about working with musicians in extreme and highly challenging situations to create unforgettable moments that exemplify what can be done when music and brand message are in perfect harmony.

Friday will also see the start of the 24h ADE Hackathon. The third edition of ADE’s innovation pressure cooker will take place on ADE Friday -right in the centre of the conference area around Leidseplein- and we’re now looking for a great mix between music, technology, data, entrepreneurship and innovation from creative minds.

Saturday 20th
On the final day of the conference ADE Sound Lab will welcome music and tech adventurist Imogen Heap, who will highlight how innovations such as Distributed Ledger Technology, Artificial Intelligence and Virtual Reality have the potential to change the lives of music makers. Also in the studio XL sessions will be Colin Benders will use his module synthesizers to show the ins and outs of his work-process using during his crazy masterclass.

Don Diablo regarded as one of the founding fathers of the Future House movement, will be welcomed to the Music Talk stage for an a extensive chat about his ever rising career.

The legendary Demolition XXIII signals the end of the conference program. Headed by techno titan DJ Dave Clarke, the panel of DJs, producers and music industry figures are ready to give you an honest appraisal of your work.