A FURTHER 8 WORLD CLASS ARTISTS ADDED TO SW4 LINE UP

A FURTHER 8 WORLD CLASS ARTISTS ADDED TO SW4 LINE UP

A wealth of international talent concludes the second phase of our 2015 lineup, as eight world class artists are added to the South West Four bill. A combination of new and familiar faces, these artists reflect the truly international nature of our festival, with these acts flying into the Capital exclusively for their Clapham Common performance. They will be followed by music lovers from all over too, with more people than ever making the pilgrimage to South West London.

Such interest in our event is a testament to it being the most ambitious instalment of SW4 to date, as we welcome over one hundred artists across the weekend for the first time ever and debut our second (indoor) main stage. 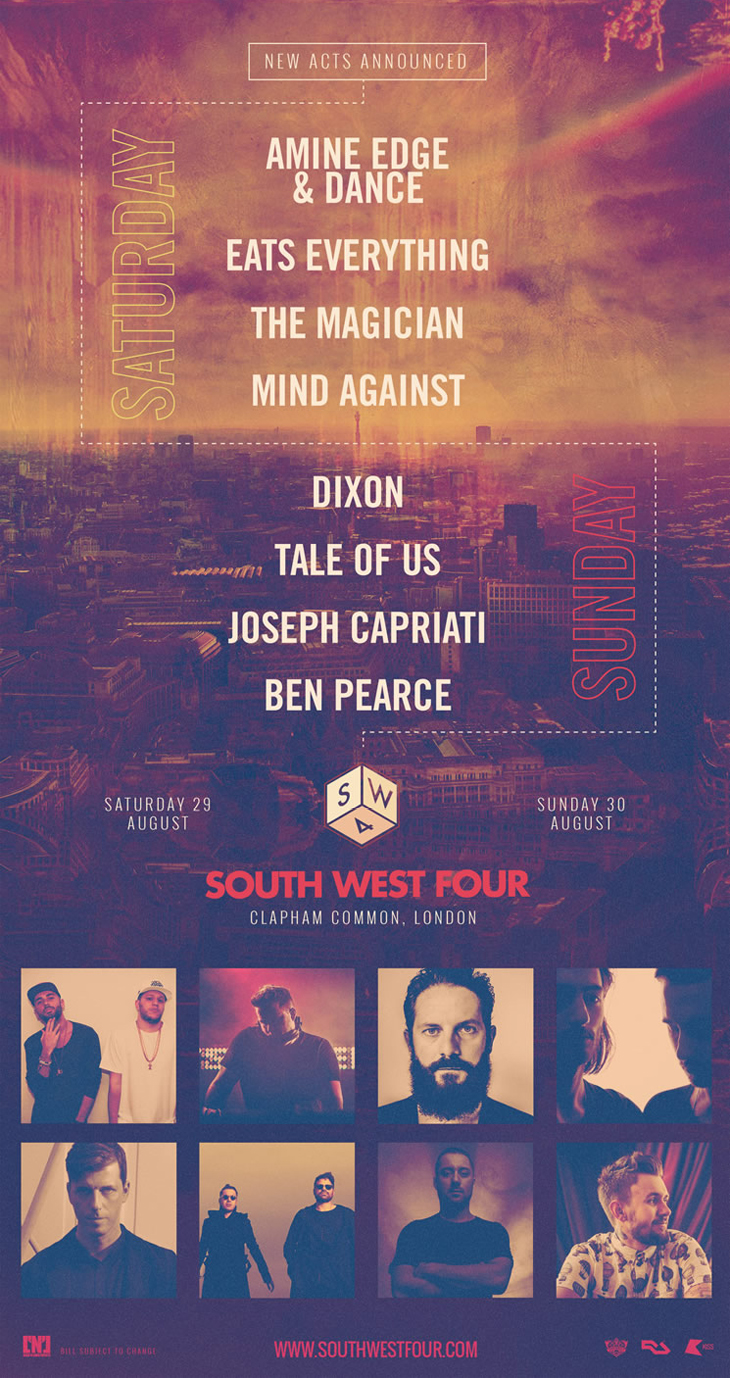 Hailing from Southern France, Amine Edge & Dance have taken the world by storm with their ground-breaking sound which incorporates early house, 80’s hip-hop, breakbeats and everything in between. Titled ‘G-House’, this latest movement has found a home via their revolutionary label CUFF, to which they owe much of their astronomical success. As big fans of their colossal uprising, we’re delighted to welcome them to our outdoor main stage on Saturday 29th August for their hugely anticipated SW4 debut.

Since 2011, Bristolian Dan Pearce aka Eats Everything has been at the forefront of the UK house scene. Now in 2015, he is one of the most in-demand DJs on the planet. Last year saw Eats present an Edible stage at a UK festival for the first time, as he took control of his own 7000 capacity stage at SW4. With the arena proving such a booming success, we knew we had to get him back to the Common so he could bring it alive once again.

Previously one half of revered Balearic disco duo Aeroplane, our next addition disembarked that flight and boarded his own magical carpet ride in 2010 when The Magician was born. Having just put Europe under his spell with a fifteen date ‚Potion’ tour, South West Four is confirmed as the next London date for this hugely in-demand act. With a sound that floats effortlessly between disco, house, funk and soul, the Belgian-born DJ is one not miss this August. 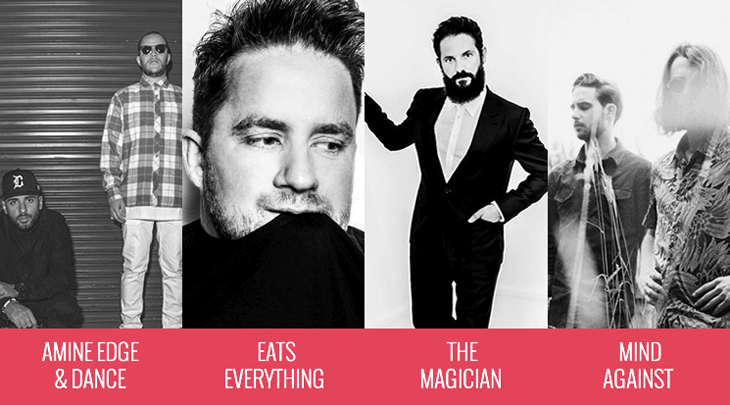 Our next Saturday act is another we’ve had our ears on for some time, as we bring house and techno purists Mind Against to Clapham Common for their debut SW4 performance. Signed to the underground powerhouse ‘Life & Death’ imprint, their organic sound has seen them put in standout sessions at Berghain, Watergate, fabric, D-Edge and Cocorico. Don’t miss their exclusive appearance on Saturday 29th August.

There are very few tastemakers in the world that can be considered in the same league as Berlin’s Dixon. Founder of the seminal ‘Innervisions’ imprint alongside Âme, 2014 witnessed Dixon enter at #1 in the Resident Advisor Top 100 DJs poll for the second consecutive year, whilst his packed diary represents a vast catalogue of the greatest parties the world has to offer. Returning to London after a five month hiatus, we guarantee his first ever SW4 appearance will be worth the wait.

Following an incredible performance at SW4 last year, Tale of Us return for their exclusive London festival play. In recent months the duo have taken a break from touring to concentrate on their studio output, with their incredible remix of Caribou’s ‚I Can’t Do Without You‘, proving to be one of the most popular records of the past year. Having fought off fierce competition for their services, we are delighted to welcome back one of our favourite acts to destroy SW4 once again.

Recognised as one of the most exciting DJs to emerge through the techno scene in recent years, Joseph Capriati’s rise to prominence has been nothing short of relentless. A key member of Adam Beyer’s Drumcode stable and resident DJ for Marco Carola’s Music On, Capriati’s SW4 debut represents one of the most anticipated this year. Returning to London for the first time since his marathon set at fabric in February, the arrival of the Italian titan is one we are extremely excited about.

Ever since he emerged to win ‚Best Breakthough Producer‘ at the 2013 DJ Mag ‚Best of British‘ Awards, Purp & Soul front man Ben Pearce has been on our most wanted list. Two years on and we are pleased to bring him to the festival for the first time. The launch of his Sextape series, a concept focusing on funk, soul and disco, plus his new monthly radio show on Rinse FM, illustrates that 2015 will be his best year to date. We’re delighted to have him on board… 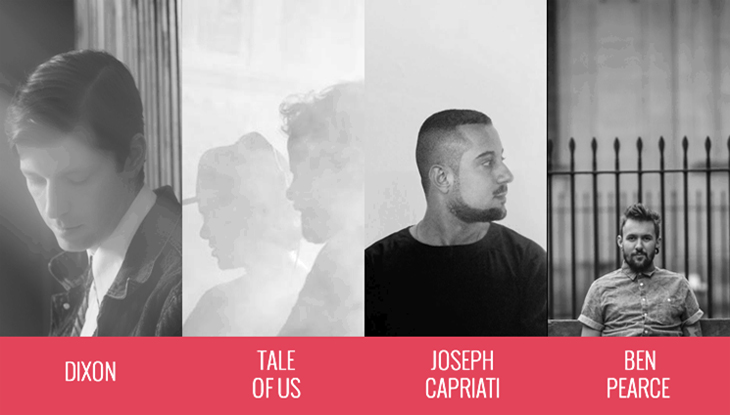 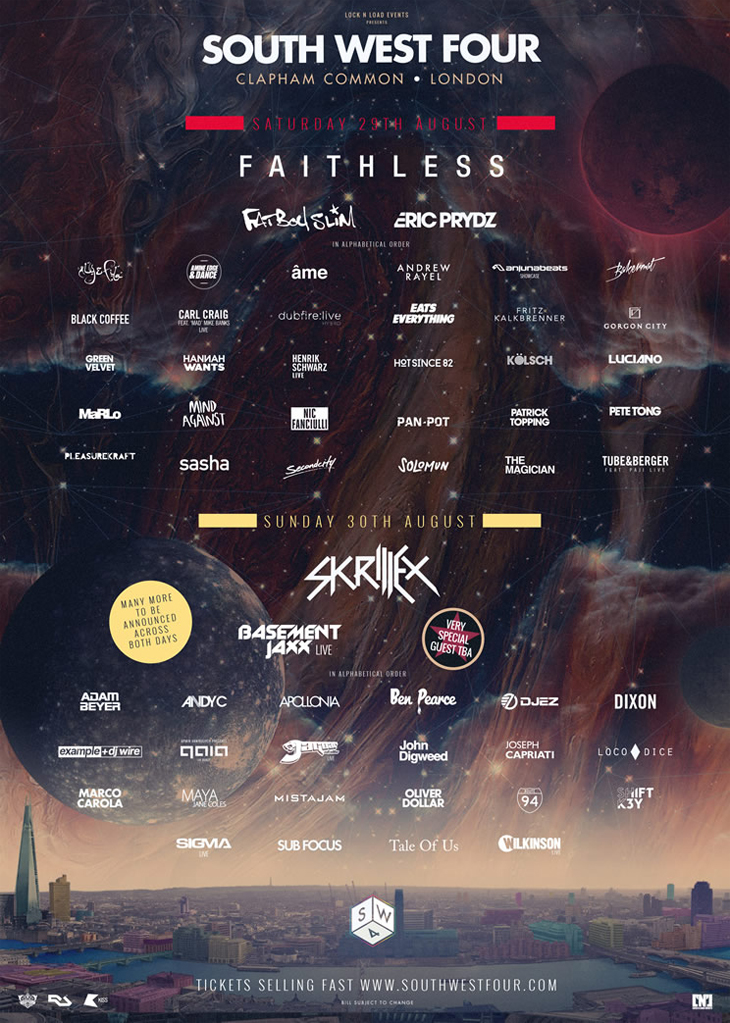