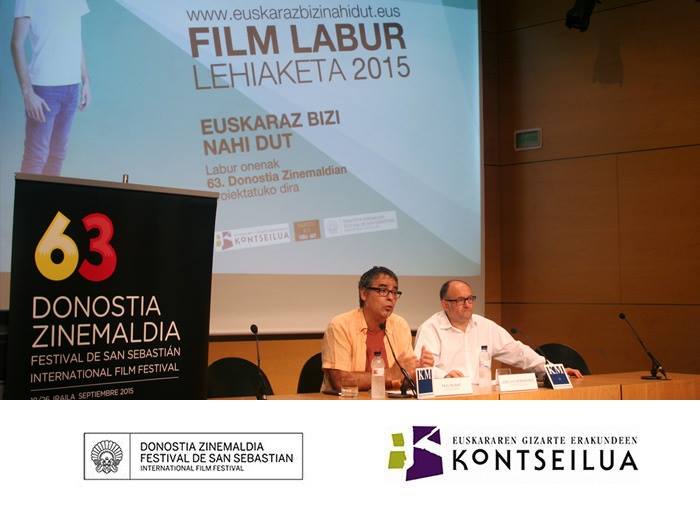 The San Sebastian Festival and Kontseilua have presented a new edition of the short film competition “euskaraz bizi nahi dut” (I want to live in Basque). This year will yet again include a section for professionals and another for amateurs with a total of more than 5,000 euros in prizes. The best works will be screened at the 63rd edition of the San Sebastian Festival.

The Secretary-General of Kontseilua, Paul Bilbao, and the Director of the San Sebastian Festival, José Luis Rebordinos, participated in the presentation.

Paul Bilbao started by explaining the “euskaraz bizi nahi dut” dynamic promoted by Kontseilua in recent years, a dynamic encompassing the short film competition of the same name. “The core aim of the competition is to spread the idea of “euskaraz bizi nahi dut, to narrate the idea using an audiovisual media. We want increasing numbers of authors to take up the idea and develop it in their future works” said Bilbao.

That’s the ultimate aim of the “euskaraz bizi nahi dut” dynamic; we want to see increasingly greater numbers of people make the idea their own; we want more and more people to live using the Basque language, for those who know it to speak it and those who don’t know it to learn it” added the representative of Kontseilua.

All of the competing works must respond to this objective. In the words of Bilbao “the works must talk about wanting to live in Basque: why we make the choice, the obstacles we come across, the joys we feel, the complicities that arise… we want the short films submitted to say all this and more”.

As regards the competition terms & conditions, the main new feature this year refers to the length of the short films: they must last for no longer than 15 minutes. As for the sections, there will be two again this year, one for professionals and another for amateurs. The authors themselves will decide which one they submit their works for. A total of more than 5,000 euros will be given in prize money (3,500 euros in the professional section and 1,750 euros in the amateur section). The submission deadline is 24 August 2015.

For his part, the Director of the San Sebastian Festival José Luis Rebordinos stressed the importance of this kind of initiatives in promoting the use and normalisation of Euskara, the Basque language. “As we saw at last year’s Festival, more and more films are being made in Basque and the number of people who watch films in the language is on the rise. We must continue to encourage this trend”.

“There is still a long way to go, but as we said last year ‘the road is made by walking’. Last year, for example, cinema in the Basque language took yet another step forward when two films in Euskara were programmed for the San Sebastian Festival official selection, one of which was made completely in Basque (Loreak). This is a sign that something is on the move” added Rebordinos.

The collaboration of the San Sebastian Festival in organising the “euskaraz bizi nahi dut” short film competition falls within this dynamic; it is one of many steps forward, and is yet another initiative taken by the Festival to promote filmmaking in the Basque language.

Thanks to the said collaboration, the best short films will be screened and receive awards at the 63rd San Sebastian Festival in September. Festival Management Committee member Maialen Beloki will sit on the competition jury.

Lastly, the organisers have revealed that, in addition to representatives of the San Sebastian Festival and Kontseilua, other important film directors will sit on the jury, such as Jon Garaño, one of the directors of Loreak.

Gas Natural Fenosa renewed its agreement as Official Sponsor of the Festival and has presented the shorts that form part of Cinergy in its second year.

GAS NATURAL FENOSA presented the second year of CINERGY, an initiative set up to make the general public more aware about energy efficiency through the seventh art and to promote talent in the Spanish film industry. On this occasion the company has produced four shorts with the collaboration of EL TERRAT that use humour to make viewers aware of the importance of energy saving and efficiency.

Three of the shorts have been made by directors as important as Isabel Coixet, Santiago Segura andPaco León and star some of the most famous actors on the national scene. Paco León’s short stars Carmen Maura and Secun de la Rosa; Santiago Segura’s stars Anabel Alonso, Enrique Villén andJoaquín Reyes; and Isabel Coixet’s stars Silvia Abril, Julián López, Kira Miró, Rodrigo Guirao and the comedian Andreu Buenafuente. The fourth short film will emerge from the “CINERGY Talent” competition launched by the company among audiovisual communication and film students.

During the presentation of the project, which took place today in San Sebastián, the General Manager of Communication and the Chairman’s Office at GAS NATURAL FENOSA, Jordi Garcia Tabernero, and the director of the San Sebastián International Film Festival, José Luis Rebordinos, signed the agreement that makes the energy company the official sponsor of this festival for the fourth time. What will be the 63rd Film Festival will be held from the 18th to the 26th of September 2015.

This is how GAS NATURAL FENOSA is renewing its support for the most important of the Festivals that are held in Spain, and showing once again its firm commitment to culture, and to be more precise, to the development of Spanish cinema, one of the industries that has been most severely affected by the economic crisis, especially as far as festivals have been concerned, as they have undergone significant cuts in their sources of funding in the last few years.

The four shorts in the second year of CINERGY will convey the importance of energy saving and efficiency and will be linked to the products and services provided by GAS NATURAL FENOSA. Unlike last year when the project presented stories combining horror and suspense, this year the shorts will raise awareness about energy efficiency through humour, a genre that EL TERRAT is a national benchmark in. All the shorts will be screened at the most important film festivals in the country, and will reach the cinema theatres and homes of thousands of Spaniards.

As the General Manager of Communication and the Chairman’s Office at GAS NATURAL FENOSA, Jordi Garcia Tabernero, said during the presentation of the project today in San Sebastián, “CINERGY is a further step in our commitment to cinema, that is now well-established and recognised and has provided a significant boost to our company’s reputation. It also enables us to combine this association with cinema with the other main line of work among the company’s social commitments: raising awareness of energy efficiency”. The film director, Paco León, and the president of EL TERRAT, Andreu Buenafuente, who acted in one of the shorts as well, also took part in the event.

The short film “Un corazón roto no es como un jarrón roto o un florero” is a romantic comedy directed by Isabel Coixet starring Silvia Abril, Julián López, Kira Miró, Rodrigo Guirao and the comedianAndreu Buenafuente. The plot revolves around a heart specialist who tries to mend her broken heart after a disappointment in love for which she might be able to count on the help of the energy manager that works in her hospital.

Tension, emotion, dirty jokes and even a crime form the storyline of the short, “Nivel 7” directed bySantiago Segura. This is a story that starts with the surprise visit by the president of a residents’ association obsessed with responsible consumption to a resident who hides the fact that she is a heartless waster of watts behind the apparent facade of a discreet lady. In this short Segura directsAnabel Alonso, Enrique Villén and Joaquín Reyes.

In “Vaca Paloma” Paco León takes another look at the relations between a mother and son, but this time he does so with a surrealist touch. The short bases its plot on relations between a mother and son, that are complicated enough in themselves, and even more so if the son has a dairy cow that is a film buff with supernatural powers. The mother, Carmen Maura, will have to accept that, at a certain time in life, she is no longer the only source of energy that emerges from motherly love; while the son, Secun de la Rosa, who is very attached to his cow, will realise that the advice he continually receives from his mother is a problem.

Call for Entries for this year’s Savage Cinema!

Submit your 2015 action sports and adventure films until July 16th.

More than three years ago, Savage Cinema was born to bring adventure and action sports movies to the San Sebastian Film Festival. This edition marks a turning point in its trajectory: the section no longer is a new project – it evolved to an entity in its own right, outstanding for its efforts to bring the latest action sports and adventure productions to the general public – in cinemas and in the streets.

The San Sebastian Film Festival wants to thank all participants for their faith in the section and invites them, alongside with filmmakers with projects in development, to present their latest films related to sport and adventure at this year’s Savage Cinema. Use the opportunity to submit your work to Savage Cinema until July 16th. Entries beyond that deadline cannot be accepted.

Savage Cinema showcases the most ambitious titles and offers them not only to the general public but also to film enthusiasts and members of the audiovisual market, present at the Festival. It gives the opportunity to share tales of great adventure and passion with directors, producers and distributors, emphasising the state of the genre and the advantages of choosing cinema as the platform for launching.