The 56th Karlovy Vary International Film Festival, a non-specialized festival with two competitive categories, took place from July 1st to July 9th this year. It was organized by Film Servis Festival Karlovy Vary, a.s., with Jiří Bartoška as the president of the festival and Karel Och as its artistic director. The 57th Karlovy Vary IFF will be held from June 30th to July 8th.

On July 9th 2022, the festival’s juries presented awards for the best films at the closing ceremony of the 56th Karlovy Vary IFF.

Iran-set coming-of-age story “Summer With Hope” won the top prize at the 56th Karlovy Vary International Film Festival, winning over the Crystal Globe jury with its story of youthful competitive swimmer Omid as he struggles to train for a risky ocean competition.

The film, directed and written by Iranian-Canadian Sadaf Foroughi, is her sophomore feature, following up on 2017 teen drama “Ava.”

The closing night gala, which filled the Grand Hall of the storied Hotel Thermal in the western Czech spa town, saw several honorees commenting on the critical issue of artistic freedom and urging solidarity with the people of Ukraine. Benicio Del Toro, honored with the fest president’s prize, praised Karlovy Vary for hosting the Odesa film fest’s work-in-progress event this year, saying, the support would help “ensure another culture won’t be a casualty of war.” He also thanked film audiences, describing them as “people like you, who breathe life into these movies with every viewing.”

SPECIAL JURY PRIZE (15 000 USD)
The financial award is shared equally by the director and producer of the award-winning
film.

You Have to Come and See It / Tenéis que venir a verla
Directed by: Jonás Trueba
Spain, 2022

CRYSTAL GLOBE FOR OUTSTANDING ARTISTIC CONTRIBUTION TO WORLD CINEMA
Australian actor Geoffrey Rush (participating in famous works, including “Shin” and “Pirates of the Caribbean”) won the “Crystal Globe” award for his contribution to world cinema, during this 56th edition of the festival.

Geoffrey Rush, at the ceremony to be honored with a lifetime achievement award, recalled his past film shoots in the Czech Republic for “Les Miserables” and the “Genius” National Geographic series in which he played Albert Einstein, adding he felt his greatest honor was being invited “into this prismatic, inspirational world of Bohemia.”

He also cited Czech director Milos Forman, the playwright Karel Capek and Vaclav Havel – along with the theater work of actor Bolek Polívka – as artistic founts from which he has drawn lessons since his early career days.

The KVIFF President’s Award was presented to actor Bolek Polívka at the start of the closing ceremony. “I am touched and full of joy,” said Polívka at the end of his acceptance speech, reflecting on his long and rich career with his unique humour. “I console myself with the idea expressed by Goethe: A handsome young man is a freak of nature. A handsome old man is a work of art.”

The second to receive the KVIFF President’s Award was actor Benicio Del Toro. “It’s strange to look at all the movies I’ve made. I don’t know how I got there – maybe it was luck, maybe talent, maybe perseverance. But my work is a by-product of many people’s trust in me, even at times when I didn’t believe in myself,” said Del Toro, recalling the people who helped shape his professional life – including actor James Caan, who passed away a few days ago. Del Toro went on to thank the audience because “the viewers breathe new life into a film every time they watch it”.

The American actor also mentioned the support for Ukrainian filmmakers through the KVIFF Works in Progress platform, adding that he was happy to receive an award from a festival that is trying “to make sure that culture doesn’t become a casualty of war”.

THE ECUMENICAL JURY AWARD
Since 1994 the Ecumenical Jury has awarded films from the Crystal Globe Competition that display high artistic quality while questioning social, political, ethical, and spiritual values. It promotes directors who emphasize the search for truth, justice, and hope in accordance with Christian Gospels.

FIPRESCI AWARD
The International Federation of Film Critics Jury awards two FIPRESCI Prizes to films from the Crystal Globe Competition and from the Proxima Competition that best promote film art and encourages new and young cinema.

KVIFF Eastern Promises 2022, the festival’s production market, showcased a total of 35 film projects across 4 programs during the Karlovy Vary IFF.

Works in Progress is a platform for feature and documentary films in post-production or late-production stage from Central and Eastern Europe, the Balkans, the former Soviet Union, the Middle East and North Africa, which will premiere after the Karlovy Vary IFF. A total of 10 projects were pitched. The winner was awarded a prize consisting of post production services from UPP and Soundsquare. Furthermore, two projects were awarded 5,000 EUR each for their further development, one sponsored by TRT Cinema and one by KVIFF.

WORKS IN DEVELOPMENT – FEATURE LAUNCH
For this KVIFF & MIDPOINT Development Award, KVIFF has partnered with the Midpoint Institute script and project development program as well as with the When East Meets West co-production market and Trieste Film Festival. Together they have showcased 9 projects that have gone through development and mentoring within the Feature Launch program. The jury has awarded a 10,000 EUR cash prize for further development of the project.

FIRST CUT+ WORKS IN PROGRESS
First Cut+ is a programme created for boosting the competitiveness and marketability of feature films that previously participated in First Cut Lab. The programme was launched in 2020 through close cooperation with two dynamic and well-established film industry platforms: Trieste’s When East Meets West and Karlovy Vary IFF’s Eastern Promises Industry Days. Each year, it promotes a portfolio of 16 fiction feature films at the stage of post-production – eight of them were presented here in Karlovy Vary.

In full support of Ukrainian filmmakers and festival organisers, this year’s KVIFF hosted the Works in Progress programme of the 13th Odesa International Film Festival, which cannot be held there because of Russian aggression. Eight full-length film projects in the final stage of shooting or in post-production produced in Ukraine or in co-production with Ukraine, selected by the OIFF selection committee, were presented by their creators. The jury has awarded a 10,000 EUR cash prize for further development of the project, sponsored by Barrandov Studio.

U Are the Universe / Ty – Kosmos
Directed by: Pavlo Ostrikov
Ukraine

The 56th Karlovy Vary IFF 2022 was attended by 10 592 accredited visitors. Of that number 8 717 had Festival Passes, 414 were filmmakers, 931 accredited film professionals, and 530 journalists.
There were a total of 453 film screenings and total of 121 015 tickets were sold. A total of 170 films were screened, including 108 feature fiction films, 24 feature documentaries and 38 short films. 35 films received their world premiere, while 6 had their international premiere and 4 their European premiere. 158 screenings were personally presented by delegations
of filmmakers. 86 Press & Industry screenings were held. The KVIFF Eastern Promises production market showcased 35 films in development or
production. 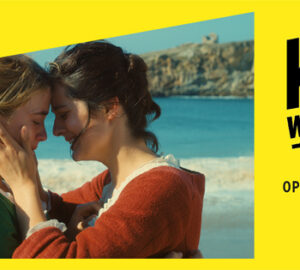