The 53rd Karlovy Vary International Film Festival, a non-specialized festival with three competitive categories, took place from June 29th to July 7
th this year. It was organized by Film Servis Festival Karlovy Vary, a.s., with Jiří Bartoška as president of the festival and Karel Och as an artistic director.

The 54th Karlovy Vary IFF will be held from June 28th to 6th July 2019. On July 7th 2018, the festival’s juries presented awards for the
best films at the closing ceremony of the 53rd Karlovy Vary IFF.

GRAND PRIX – CRYSTAL GLOBE (25 000 USD)
The financial award is shared equally by the director and producer of the award-winning film.
“I Do Not Care If We Go Down in History as Barbarians” / „Îmi este indiferent dacă în istorie vom intra ca barbari”
Directed by: Radu Jude
Romania, Czech Republic, France, Bulgaria, Germany, 2018 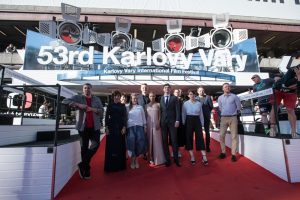 Personal stories and quests for truth dominated the Karlovy Vary film fest this year with Romanian Radu Jude taking the Crystal Globe and $25,000 for best film with his story of a director who refuses to compromise with Holocaust deniers, I Do Not Care If We Go Down in History as Barbarians.

The film, which also won the Europa Cinemas network prize and support, employs a meta-structure historical immersion to convey a little-known chapter of WWII in which popular general Ion Antonescu led a massacre of Jews. Jury member Mark Cousins said Jude’s film “points a finger at those people who are rewriting history.”

Producer Ada Solomon, in accepting the award with Jude, dedicated it “to every true patriot who dares to speak the truth about their country.” She cited parallels in the fight for the truth about Romania’s role in Holocaust with the honesty of Ukrainian filmmaker Oleg Sentsov, who has been imprisoned in Russia since 2014 on trumped up charges and is now on a hunger strike, voicing hope he “will be a filmmaker, not a martyr.”

EAST OF THE WEST GRAND PRIX (15 000 USD)
The financial award is shared equally by the director and producer of the award-winning film.
Suleiman Mountain / Suleiman gora
Directed by: Elizaveta Stishova
Kyrgyzstan, Russia, 2017

EAST OF THE WEST SPECIAL JURY PRIZE (10 000 USD)
The financial award is shared equally by the director and producer of the award-winning film.
Blossom Valley / Virágvölgy
Directed by: László Csuja
Hungary, 2018

FEDEORA AWARD
Awarded by the Federation of Film Critics of Europe and the Mediterranean (FEDEORA) to the best film from the East of the West – Competition.

EUROPA CINEMAS LABEL AWARD
For the best European film in the Official Selection – Competition and in the East of the West – Competition.

During Works in Progress, eleven projects were presented from countries of Central and Eastern Europe, the Balkans, the former Soviet Union, and now also the Middle East. A prize in the value of 100,000 Euro will be given to the project. The whole award consists of post-production services in UPP (60,000 Euro), Soundsquare (30,000 Euro), and a cash prize of 10,000 Euro from Barrandov Studio.

Ten projects from Central and Eastern Europe, the Balkans, the former Soviet Union, and the Middle East were presented within Docs in Progress event which introduced new documentary films that will premiere after the Karlovy Vary IFF. The winning film received a cash prize in the amount of 5,000 Euro.

A Special Mention was awarded to the Polish project Little Poland by Matej Bobrik.

STATISTICS OF THE 53RD KARLOVY VARY IFF 2018
The 53rd Karlovy Vary IFF 2018 was attended by 13 080 accredited visitors. Of that number 10 857 had Festival Passes, 403 were filmmakers, 1190 film professionals, and 630 journalists. There were a total of 501 film screenings and total of 140 135 tickets were sold. A total of 236 films were
shown: 181 feature films (143 full-length and 38 short) and 55 documentary films (35 full-length and 20 short). 35 films received their world premiere, while 8 had their international premiere and 7 their European premiere. 182 screenings were personally presented by delegations of filmmakers. 103 Press & Industry screenings were held.

FILM INDUSTRY AT THE 53RD KARLOVY VARY IFF 2018
1373 film buyers, sellers, distributors, film festival programmers, representatives of film institutions, and other industry professionals were accredited for the 53rd Karlovy Vary IFF. 545 accredited film professionals came to the festival from abroad. 265 film buyers and distributors and 183 festival programmers chose from the new films and Works in Progress.