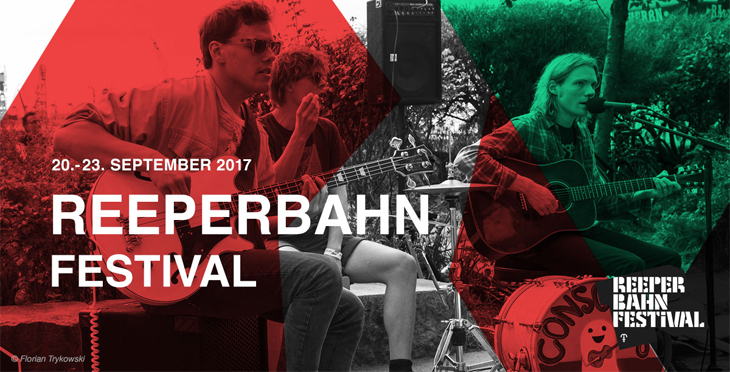 The Dutch Impact showcase returns to Reeperbahn bringing you the best artists from the Lowlands. The event will take place at Molotow on Thursday 21st September and will see performances from Dakota, Iguana Death Cult, Loren Nine, My Baby, Naaz, Navarone, Sue by Night and The Cool Quest, with other acts confirmed to play at the festival being Dool, Kuenta I Tambu and Paceshifters. 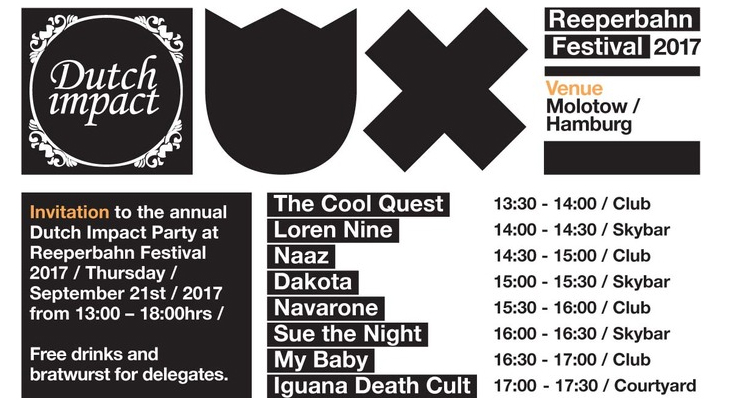 More information on all the acts performing at Reeperbahn HERE!

Listen to all the acts here!

You can also catch these amazing acts at their other shows during Reeperbahn festival:

Dakota
Do you know that feeling? That feeling of wanting to lay back on the couch, close your eyes and drift away to dreamy and hazy music? The Netherlands’ Dakota do just that. Dakota’s new project titled “Leda” blends Psychedelic guitar riffs with indie-pop roots, coming together into a neatly packaged 6 track EP. But don’t let this lo fi charm fool you, the live show of this four piece band gets you to the edge of your seat.They seamlessly blend California feels with Garage Rock and Dream Pop. Look out for Dakota as they make their way in the underground pop scene.

Dool
Emerging from underneath the fumes of Rotterdam’s vast industrial harbour comes DOOL. Dutch for ‘wandering’, DOOL takes their audience on an otherworldly journey through dark, melancholic songs, allowing only the faintest glimpse of hope and light to penetrate the listeners’ minds. When formed out of the ashes of Dutch rockbands Elle Bandita and The Devil’s Blood in late 2015, DOOL quickly gained a following after releasing their first song and accompanying video ‘Oweynagat’, resulting in both a highlighted showcase at Roadburn festival as well as a record deal with German ‘Prophecy Productions’. Their praised debut album ‘Here Now, There Then’ was released in February 2017, followed by two succesful European tours in the same year. All Those Who Wander Are DOOL.

Iguana Death Cult
Rotterdam’s rousing Iguana Death Cult has claimed its own dominion inside the Dutch port’s concrete jungle. The foursome’s high-octane protopunk and acid-drenched psychedelics create havoc not unlike a ferocious horde of bees. Iguana Death Cult is likewise hyperproductive, not to mention stronger as a whole that the sum of parts. And once you poke their nest a bit too hard, the band’s sheer propulsive force engulfs you from all sides and angles.‘Territorial’ might be the best way to describe Iguana Death Cult. Naturally, debut album The First Stirrings Of Hideous Insect Life is a perfect match for their well-documented dynamo-like thrusts and melodic squalls, which come as natural to them as a (Jelly)fish in the water.

Kuenta I Tambu
Inspired by Traditional Afro Caribbean Music from Curaçao and European Dance, Kuenta i Tambu has created a brand new sound! They cleverly found a balance between electronic sound samples, singing and chanting and the infectious rhythms played by ritual tambú drums. Live, Kuenta i Tambu are a non-stop Carnival, a riot of beats and rhythms that take the audience deep into the Caribbean. Above all, though, it’s obvious that the musicians enjoy playing the music and the live percussion thunders through the air. They already played at stages like: Glastonbury, Bestival, Womad, Best Kept Secret Festival, Body & Soul Festival, Europvox, Pole Pole, Pohoda Festival, The Great Escape, Eurosonic/Noorderslag, Amsterdam Dance Event, Electrochoc Festival, SXSW

Loren Nine
Loren started playing the piano at the age of two and by 9 she wrote her first song, in English too, entitled Lavender Fields. By the time she was 13, she had learned the guitar and signed her first publishing deal as a singer songwriter. Loren made her debut on Dutch national radio to be followed by and appearance on Holland’s biggest Talk show ‘De wereld draait door’. With a self-released song and, barely 16 Loren was chosen to star in the Bose Commercial which was broadcasted in the Netherlands, Italy and the USA. Having recently graduated from the Dutch Herman Brood Academy, Loren now has the time to focus solely on music. Partners and interested labels haven been very flattering likening her style as a singer to Norah Jones and Adele and her talents as a writer are unique and very versatile. Loren is best described as a creative soul with a passion for music, which is contagious to anyone who works with her.

My Baby
It hasn’t taken long for Amsterdam based psychedelic, shamanic trio MY BABY’s swampy blues and funk-inflected sound to cast a formidable spell, taking the world by storm.
Over the past 3 years, Dutch brother-sister-duo Sheik (drums) and Cato van Dyck (vocals) and New Zealand guitarist Daniel “daFreez” Johnston have had their mojo working overtime and apart from touring relentlessly, they managed to release a new album called“Prehistoric Rhythm” this year. MY BABY’s music has been influenced by the power of spiritual music (gospel and voodoo spirituals) and the entrancing hypnotic quality found in music accompanying shamanic rituals. With the release of their new album, MY BABY endeavours to take the audience on a shamanic influenced musical journey. The new album brought the band some noteworthy achievements, like: First Dutch band to perform at the mainstage of the legendary Isle of Wight Festival, second time playing at Glastonbury Festival, airplay on BBC Radio 1 and BBC Radio 6 as well as sold out European club shows.

Naaz
Inspired by the likes of Bruno Mars and Demi Lovato, Naaz is a singer/songwriter from the Netherlands who seeks to inspire people with her music. She began writing songs when she was six, but it took a while to convince her Kurdish family to allow her to make her music public. After posting cover versions of pop songs to her YouTube channel, she released her debut single, „Nobody Said,“ which she co-wrote with her brother Yaad, in 2013. In 2015, she appeared on Yellow Claw & Flux Pavilion’s „Catch Me,“ and released another pair of singles, „Sadboy“ and „Escape,“ in 2016. The following year, the track „Words“ arrived in advance of the debut EP Bits of Naaz.

Navarone
Navarone is a Dutch rock band that combines elements of soulful seventies rock with influences from grunge and alternative rock. Think of the classic rock, blues and progressive rock of the 70’s (Led Zeppelin, Pink Floyd) mixed with the poppy grunge/alternative of the 90’s (Soundgarden, Pearl Jam, Nirvana), topped off with more modern influences like QOTSA, Muse, Foo Fighters and Wolfmother. Add this along with an enormous live reputation and you understand why Navarone has grown into one of Europe’s best, most versatile and appreciated rock bands in recent years. With their newest album Oscillation also internationally released in 2017, Navarone are now ready to take on the rest of Europe.

Paceshifters
Inspired by the grunge movement decades ago that shook the foundations of alternative music, PACESHIFTERS bring an innovative twist on the genre whilst also boasting the complete unadulterated attitude that it was renowned for. PACESHIFTERS are notorious for bringing an audience to its feet in full appreciation. Having previously rocked festivals such as Woodstock (Poland), Groezrock, Zwarte Cross, Pinkpop, Exit, Rock for People and SXSW the trio have honed their sound to perfection in the live arena and have evolved into a very devoutly passionate Rock band with a sound that is sure to enthrall any listener who enjoys the heavier side of Nirvana with doses of powerful Incubus-esque melodies and riffs along with the grit and energy of Chevelle.

Sue The Night
Sue The Night is the stage moniker of Dutch artist Suus de Groot. The sultry sound of Sue’s melodies is guaranteed to get you hooked to its spiraling layers of melancholy with a shimmering feel-good summer vibe. Since the release of debutalbum ‘Mosaic’ (2015) the six-piece band has been on a ride; airplay for singles The Whale and Top of Mind, 3FM award nominations for Best Band and Best Videoclip (Mind Dear), sold out clubshows and playing big festivals as Best Kept Secret, Indian Summer, Zwarte Cross, Eurosonic Noorderslag. In August 2016 the band was asked to be a monthly musical guest at the biggest Dutch Daily Talkshow ‘De Wereld Draait Door’. New singles ‘the World Below’ an ‚Mind Dear‘ became hits on both Dutch radio 2 & 3. With the release of the second album ‘Wanderland’ (april 2017) Sue’s ride continues, bringing an unique sound to new countries outside the Netherlands as well.

The Cool Quest
Dutch band The Cool Quest has played over 500 energetic live shows. In 2014 a major step was taken by focusing on writing and producing their debut album “Funkin’ Badass” which took the band to national radio and TV.

2015 became a very hot year for the band, starting with an appearance on Europe’s largest showcase festival Eurosonic in January. Their hit single ‘Shine’ was added to the playlist of Dutch national radio 3FM and the band won a Radio 6 Award for ‚Best Group‘.
Since saxophone sounds have been replaced by guitar sounds The Cool Quest has developed a more electric sound. Their latest single ‘Coastline’ was added to several Spotify playlists in Benelux, France, Germany and UK. With a rapidly growing fanbase, The Cool Quest plays more than 45 festivals in Europe this Summer!